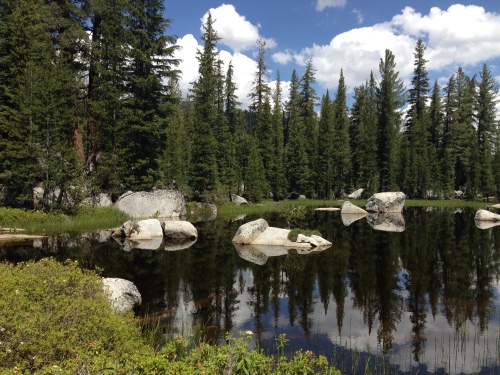 This being my last day off before returning to my volunteer stations, I wanted to get in a decent hike. Several years ago, I had tried this hike but found my navigational skills were not up to the challenge. I inferred from several conversations that a fellow volunteer, Cyndi, knew the trail.

We arrived at the trailhead (across Tioga Road from Murphy Creek parking and picnic tables) around 9:30 a.m. It turns out Cyndi had not hiked the trail previously so the question was whether two heads are better than one.

Two Park Rangers were at the trailhead. They had been hiking the area the past several days to make sure campers had their Wilderness permits and otherwise were complying with Park regulations. We asked whether the lakes were “buggy.” “Very much so,” responded one ranger. “The lakes are surrounded by vegetation. That, combined with the water, makes for an ideal mosquito habitat.”

Despite the warning, we proceeded with our 5-6 mile hike. Much of the trail was obvious, but midway through we saw no evidence of cairns (stacks of rocks used as trail markers). After fumbling around for a half hour or so, we finally found a few cairns and soon thereafter stopped at several beautiful but buggy lakes. After taking a dozen photos or so, we headed back to Tioga Road. We had better luck on the return trip, carefully watching for cairns until we reached the well-established first half of the trail. 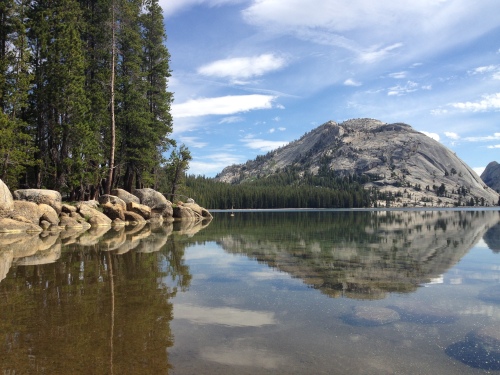 Not satisfied with the exercise provided by the hike, Cyndi decided to swim across and back Tenaya Lake (from the Murphy Creek picnic area), a total distance of one mile. I was content to finish my lunch. Afterwards I spoke with several Canadian visitors who were traveling the United States without any set time schedule. They already had seen many U.S. national parks and were on their way to seeing more. All Americans should be so lucky.

Late afternoon found Tuolumne Meadows hit with a heavy thunderstorm. Once more, my REI Kingdom 4 met the challenge, making me a happy camper.

Not wishing to remain in our now very wet campground, four of us accepted our youngest volunteer’s (Cassie) invitation to ride with her to Lee Vining for dinner at the Mobil. I had already eaten, but looked forward to their company. We discussed a variety of topics. I mentioned my recent exploratory visit to Tioga Pass Resort (TPR). Our team leader, Woodlee, had mentioned his upcoming birthday and his wish for a pie from the resort, which has an on-site baker. Upon my inquiry to the cashier, she said the pie sells for $7.25 per slice. She had to check with the baker about the price of a whole pie. After making the inquiry, she informed me that each pie is cut into eight slices. TPR would give a one-slice discount, selling an entire pie for a bargain price of $50.75 plus tax, for a total of over $56.00! It looks like Woodlee will be disappointed.

Our return trip to our campground allowed a glimpse of a full moon, lighting up much of our surroundings. We remained quietly respectful of the magnificent scene, mountains and meadows bathed in the moonlight, leading us back to our summer home. 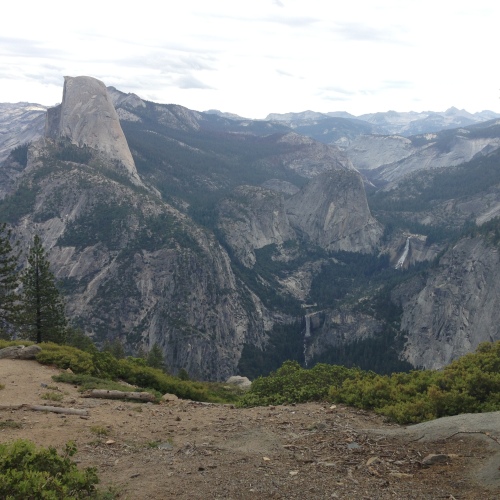 Half Dome from Glacier Point

This was the first of three days off (in a 3 days on, 3 days off schedule). I headed to Glacier Point after dropping off a fellow volunteer at Olmsted Point. Storm clouds dominated the sky, with showers in the forecast. Early morning temperatures hit 50 degrees, unseasonably mild.

After a two-hour drive, I hit Glacier Point Road around 11am. I stopped at a meadow blanketed with wildflowers and took lots of pictures. I proceeded to Washburn Point, which overlooks Half Dome, Vernal Fall, and Nevada Fall. Both falls are flowing at probably half the normal flow rate for this time of year, which means hikers on the Mist Trail will actually walk through a genuine mist rather than heavy showers. The clouds grew darker as I took more photos. 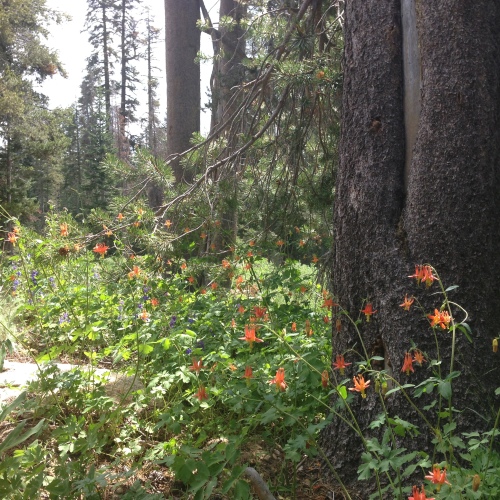 I drove to Glacier Point. Rush hour at noon. I had no luck finding a parking spot. After leaving the parking lot I parked at a pullover to get a Half Dome “road hazard” shot – the granite monolith fills the windshield past a road that drops off into oblivion.

Having no luck at Glacier Point, I drove west down Glacier Point Road to the Sentinel Dome trail. I took more wildflower photos as well as shots of Yosemite Falls – fast drying up, but an afternoon shower delays that unhappy event. The rain became heavy ten minutes before I reached my car, but I had dressed for it – a light parka and nylon shorts. Time to make the 2+ hour drive to Tuolumne Meadows.

I reached the Dog Lake parking lot at 3:45. It’s one of few spots with reliable cell phone reception. I called my brother Bob to catch up on recent news. I made it back to my campsite at 4:30 just in time to join four fellow volunteers for a drive to our favorite eating spot, the Mobil station in Lee Vining. Cassie drove. Her parents and sister met us at the Mobil when we arrived. All of us shared an outdoor table. We continued eating through a brief shower. Neither food nor diners were the worse for wear. 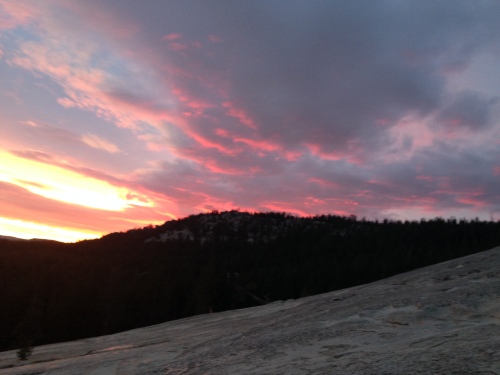 On the return drive to Tuolumne Meadows, one volunteer suggested stopping at Lembert Dome for sunset photos. The cloud formations and setting sun made for spectacular photos. This proved to be the highlight of a very good day. The showers have knocked down some of the pine pollen and lowered the temperatures. I expect a cooler night, more seasonable, with lows in the 30’s. Time to bundle up!

In my prior outing at Olmsted Point where Yosemite Conservancy maintains a telescope so visitors can observe the Half Dome hikers who make the last 200 yards of their ascent on a pair of steel cables, I did not wear my Lawrence of Arabia headgear. The result was sunburn of my ears to the point they felt like Crispy Critters. I did not repeat the mistake today. 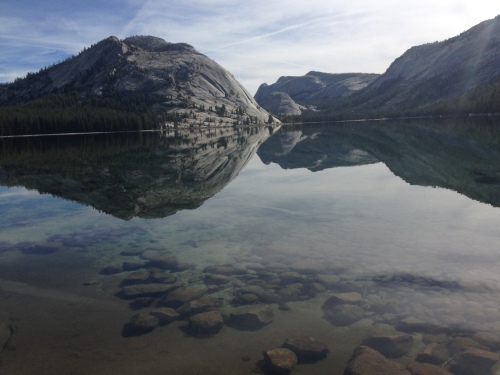 As has become my routine, I ate my breakfast at the west end of Tenaya Lake. Waterfalls are wonderful, but no scenery beats this pristine alpine lake set among massive granite domes and mountainsides. It’s my favorite way to start a summer’s day, particularly when the bugs aren’t biting.

On to Olmsted Point. I enjoyed lots of interaction today. Most visitors burst out laughing when, looking through the telescope, they identify the tiny stick-like figures making their way up the steel cables of Half Dome. Some have made the hike recently or many years before. Others shake their heads, incredulous that people would put their physical safety at risk just to say they had reached the top. 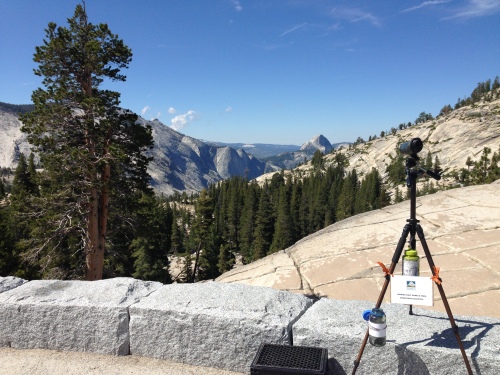 Visitors who had just come to the High Sierra from Yosemite Valley are amazed at the cooler temperatures. The thermostat had hit 105 degrees in the valley just the other day, while highs have remained in the mid-70s in the High Sierra. Along with the lower temperatures come light breezes in Tuolumne Meadows and occasional gusts at Olmsted Point.

I remained at Olmsted a half hour beyond my normal shift. I then went to the Visitors Center to turn in visitors’ donations. After a quick lunch I headed to the Park Rangers’ laundry facility on Bug Camp Road. That chore affords me the opportunity to scribble these notes and call home. Ah, the rewards of keeping up with my domestic chores!

Temporary Blog Hiatus But I’m Back!

For those who follow the blog, you noticed that I haven’t been posting recently. I had the opportunity to volunteer in Yosemite National Park for over a month–which was a great experience–but as those of you who have been to national parks know, technology doesn’t always cooperate. However, I’m back and wrote blog entries while I was out in California that I think you’ll enjoy. They’re relevant to my trip and historical of course.

During my time in Yosemite, I provided trail guidance and suggestions to hikers and answered visitor questions about the park. It was a great experience but I’m glad to be back in my own bed after living in a tent for over a month.

Here are a few teaser photos from my trip and I’ll share more in the coming weeks. 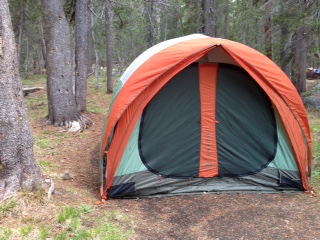 My little abode for the past month. 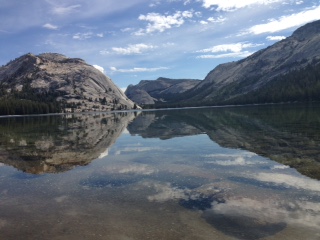 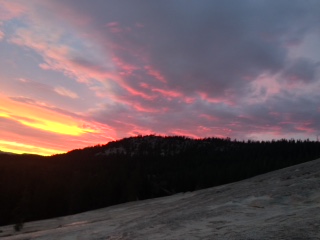