Railroad Innovations That Have Stood the Test of Time

As I researched railroad history while writing Trouble at Mono Pass, I was amazed to learn how many ways railroads continue to impact our lives and how many innovations have stood the test of time. This morning I made another discovery when I opened the local newspaper, which included an article about a 100th anniversary being celebrated by Corning. The railroad connection? The Corning Museum of Glass website explains:

The production of Pyrex began at Corning Glass Works with the development of temperature-resistant borosilicate glass for railroad lanterns. The new glass was marketed in 1909 as Nonex or CNX (Corning Non-Expansion). A few years later, Corning began to look for other uses for this glass. Bessie Littleton, wife of Jesse T. Littleton, a Corning scientist, baked a sponge cake in a sawed off Nonex battery jar. Her experiment revealed that cooking times were short, baking was uniform, the glass was easy to clean, and since the glass was clear, the cake in the oven could be monitored – all advantages over bakeware. Initially, Corning produced twelve ovenware dishes under the brand named Pyrex, and kicked off a new Corning Glass Works division focused on consumer products.

The Corning Museum of Glass is commemorating the 100th anniversary of production of the kitchenware for American consumers with America’s Favorite Dish: Celebrating a Century of Pyrex, on view June 6, 2015, through March 17, 2016.

Several much earlier railroad innovations remain in use today. In 1830, American inventor Robert Livingston Stevens developed a flat-bottomed T-shaped iron rail and a flanged wheel that ultimately became the industry standards and remain in use to this day. He also found that rails laid on perpendicular wooden ties, laid on a bed of crushed stone, provided a better and more economical surface than earlier methods. Other types of rail (pear-shaped, bullnose) were used by some railroad companies for several decades, but by the end of the Civil War and the beginning of the construction of the transcontinental railroad, the T-rail dominated. Stevens went on to develop the standard rail spike and the “cowcatcher,” the triangular frame at the front of a locomotive designed to clear the track of obstructions. 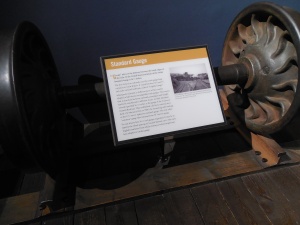 Standard gauge. Photo I took at the California Railroad Museum in Sacramento, Calif.

In the early railroad days, track gauge also varied among railroad companies. In the South, one could find three different gauges, some five feet in width. One can imagine the difficulty of unloading passengers or cargo at one railroad station in order to accommodate a different gauge track for the next segment of travel. In the North, the predominant (but not exclusive) gauge was four feet, eight and one-half inches, consistent with locomotives manufactured in Great Britain. Railroad men understood the need for a standardized gauge when the nation was about to undergo construction of the transcontinental railroad. Congress gave President Lincoln the responsibility for determining the gauge. A railroad lawyer during much of his career, Lincoln chose the predominant gauge, four feet eight and one-half inches, the gauge used in most countries today.