The two brothers made up two of the five “Associates,” the men who guided the Central Pacific’s construction of the western leg of the transcontinental railroad, from Sacramento, California, to Promontory Point, Utah. In my prior article, I provided a brief biography of one of the Associates, Collis Huntington, the most successful railroad man of the Gilded Age. The other Associates were Leland Stanford and Mark Hopkins.

As I stated in an earlier article, the Associates largely got along well, each contributing his talents in a collaborative manner, in stark contrast to the men who headed up the Union Pacific, responsible for completing the eastern leg of the transcontinental railroad. I say largely, because Huntington constantly complained about Stanford’s work ethic.

All five men were instrumental in founding California’s Republican Party, not necessarily a popular position in 1856 Sacramento. Stanford later served as California’s governor and appointed E.B. Crocker to the California Supreme Court. E.B. in later years often was referred to as Judge Crocker.

Ultimately, E.B. Crocker served as the Central Pacific’s legal counsel. In that role, he resolved the company’s many legal issues, including the legal details involved in the acquisition of other railroads. But he was much more than that. He regularly exchanged lengthy correspondence with Huntington, who served the company’s needs in the East (purchasing iron and rolling stock; securing financing; lobbying politicians in Washington).

The pressure was enormous. The Central had the onerous task of almost immediately having to drill through the Sierra Nevada granite. The price of Central Pacific bonds rose and fell with the latest rumor. Government subsidies depended upon laying as much track as possible. It was critical that the railroad “end” in a town or city, not in the middle of the Nevada desert or the Utah salt flats. Judge Crocker had to withstand Huntington’s demands to lay off Chinese and Irish workmen when weather prevented work; he knew that doing so might mean he would never get the workers back.

Huntington’s correspondence often chided his western partners when he thought progress was too slow. In turn, Judge Crocker expressed his exasperation with his Eastern Associate, letting Huntington know when he failed to timely arrange for the shipping of rails and other materials required to move forward.

As much as Huntington relished the railroad business, Judge Crocker often expressed his desire to be done with it. His health suffered from the long hours and the stress. He suffered a minor stroke in the spring of 1868. In June, 1869, only one month after officers from the competing railroads drove the golden spike at Promontory Point, he suffered a second stroke, which left him paralyzed. He was done with the railroad. In August, 1869, he and his family set out for a two-year vacation to Europe, where they went on an art buying spree.

Judge Crocker died in 1875. As one of the Associates, he helped to build the wonder of his age, a network of railroads spanning the continent. His widow, Margaret, contributed to his legacy, in the form of many charitable causes. On May 6, 1885, Margaret presented the Crocker art gallery building, grounds, and the E.B. Crocker art collection to the City of Sacramento and the California Association of Museums. The museum was the first public art gallery west of the Mississippi. It remains a vibrant world-class gallery and is located in historic Sacramento. 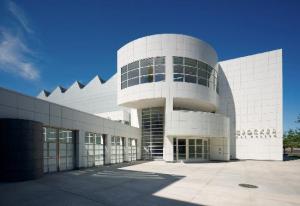 Judge Crocker’s most colorful child was Aimee, whose autobiography is titled And I’d Do It Again. She married five times and lived an extravagant lifestyle. Among her marriages was one to a European prince. The marriage of American money to European royalty, as portrayed in Downton Abbey, was not uncommon during the Gilded Age. Huntington’s adopted child Clara also married European royalty.

Sources: Bain, Empire Express; Lavender, The Great Persuader. You can learn more about the Crocker family at http://crockerartmuseum.org.

Of all the so-called robber barons of the Gilded Age, Collis P. Huntington reigned as the railroad king. He was born near Hartford, Connecticut, in 1821, the sixth of nine children in a humble household. Huntington received a very limited formal education, a few months here and there. His alma mater truly was the school of hard knocks.

As a teenager, Huntington entered the retail business. He traveled the countryside for a number of years, peddling a smattering of household goods. At twenty-one, he went to work for his brother, Solon, who owned a store in Oneonta, New York. Two years later, the brothers formed a partnership.

When news of James Marshall’s gold discovery reached New York, the brothers decided to extend the reach of their business to the California gold fields. Solon financed the venture and Collis made the trip, joined by five fellow Oneontans. They decided to take the shortcut across the Isthmus of Panama rather than sailing around Cape Horn, the route favored by most gold seekers, who feared the cholera, yellow fever, and malaria of tropical Panama more than the rough seas of the Atlantic and the Pacific.

When Huntington’s group reached the Pacific coast, they had to wait six weeks to catch a steamer to California. Huntington did not idle that time away. He walked all over the region, buying goods on the cheap and selling them at great profit to his fellow travelers. By his estimation, he made three thousand dollars during the six-week layover, an enormous sum when one considers that the average American farm worker earned thirty dollars as a monthly wage.

In California, Huntington successfully sold his goods to the miners and eventually settled in Sacramento, where he and fellow adventurer Mark Hopkins established Huntington & Hopkins Hardware in 1855. Five years later, Huntington was bitten by the railroad bug, in the form of Ted Judah, who visualized a railroad stretching across the American continent. Judah, the railroad prophet, contracted a tropical fever while crossing Panama and died in New York in 1863. Huntington and his business associates, whom Judah inspired, would see to the execution of Judah’s dream, accomplished six years later (May 1869) at Promontory Summit, Utah.

While the pressures of building the transcontinental railroad ruined the health of Edwin Crocker, one of Huntington’s business associates, it only spurred Huntington to do more. Huntington was instrumental in building and controlling railroads throughout the West. Not content there, he helped revive the Chesapeake and Ohio (C&O) Railroad. Huntington planned to build an eastern railroad that would extend from Cincinnati, Ohio, to Newport News, Virginia. He went on to establish the Newport News Shipbuilding and Dry Dock Company, still actively building ships today.

Thus, Huntington’s reach extended over the entire American continent. It is true that some of his success resulted from lining the pockets of politicians at the national and local levels. But he was not the lone sinner in that regard. He was, however, one of the most successful. He took the big chance and received great financial rewards for successfully doing so.

Huntington’s legacy lives on, not only in the railroads and shipyard that survived him, but in the charitable gifts left by his heirs. Those include Mariner’s Museum in my hometown of Newport News; Brookgreen Gardens near Myrtle Beach, South Carolina; and the Huntington Library, Art Collections, and Botanical Gardens in San Marino, California.