Through his writing, his farming experience, and his social and publishing contacts, Olmsted had established the credentials that won him the Central Park directorship in September 1857. Half the battle was won. He still had to fight for the new park’s design.

To his benefit, the architect Calvert Vaux solicited Olmsted to partner with him in the design competition. The London-born Vaux had won substantial recognition when he came to work as Andrew Jackson Downing’s assistant seven years earlier. After his initial hesitation, Olmsted joined forces with Vaux. The two men were awarded the design along with a $2,000 prize ($60,000 in today’s money) in April, 1858. Their plan had to accommodate the traffic of a large city while affording a 700-acre country-like setting to the park’s visitors. The designers did this largely by building four transverse roads that ran beneath pedestrian traffic.

Olmsted biographer Laura Roper highlighted the fact that the label “landscape architect” was new to the American lexicon:

With Central Park, Vaux and Olmsted stood at the beginning of the life work that was to raise them and their calling to recognized professional standing. Olmsted understood well that this first essay in the creation of beautiful and extensive landscape for public enjoyment was an important departure for the art in the United States, making its benefits available not to a privileged few but to citizens generally.   – Roper, FLO, A Biography of Frederick Law Olmsted, p. 144 (emphasis added).

While Vaux’s name is seldom mentioned when commentators speak of Central Park, Vaux’s contribution was every bit equal to that of Olmsted.

Over the next nine years, Olmsted worked off and on with Vaux on the Central Park project. The “off” came with the Civil War, when Olmsted directed his energies to the private Sanitary Commission, a medical philanthropy that provided severely needed support to the Union army during the Civil War. Olmsted served as Executive Secretary of the commission. Both in New York and on the battlefield, Olmsted found his greatest obstacles were political – Central Park’s controller in New York and a host of politicians, especially the army’s surgeon general, in Washington. In both instances, Olmsted learned to work around the obstacles. During the Civil War, he won praise from both Lincoln and Grant for his work on behalf of the troops.

Despite his contribution to the care of the Union soldiers, Olmsted grew tired of the politics, and was persuaded by Charles Dana in August, 1863, to take leadership of the Mariposa Company, the struggling gold mining company that occupied 70 square miles in the foothills of the Sierra Nevada. The land had originally been claimed in 1847 by John Fremont, the adventurer who ran as the Republican Party’s first candidate for President in 1856. Whether due to too little gold or poor business acumen, Fremont managed only to run up debts. Despite Olmsted’s best efforts, the mining company remained unprofitable, and Olmsted left his post in the fall of 1865.

Photo I took at Olmsted Point in Yosemite National Park

Olmsted did not leave California empty-handed. While there, he fell in love with Yosemite Valley and the Mariposa Grove of Sequoias. He wrote in support of protecting the land from private development. His work earned him appointment to the first Yosemite Commission. For the rest of his life, he continued to support the landmark’s preservation for public enjoyment. (Yosemite was designated as a National Park in 1890.)

In the summer of 1865, Olmsted and Vaux were reappointed as landscape architects to Central Park. With an annual salary of $5,000 (at a time when the average annual wage was around $350), Olmsted could return to the profession for which he was most suited. With the rebellion and Mariposa behind him, he was ready to build his legacy as America’s premier landscape architect. That legacy included parks in Boston, Buffalo, Brooklyn, Chicago, and Milwaukee, among others.

He did miss the mark once when he said San Francisco’s climate and topography precluded construction of any park similar to New York’s. Mining engineer William Hammon Hall proved him wrong with Golden Gate Park. But unlike many inflated egos, Olmsted later confessed error and had only praise for the accomplishment. Olmsted’s work included a proposal ultimately put into effect at the United States Capitol – broad marble terraces on each side of the Capitol Building, providing a formal transition from the building to the mall extending to the Washington Monument and the Lincoln Memorial.

Whether one visits New York City or San Francisco, the nation’s capital or Yosemite – to mention only a few – the visitor likely sees some significant contribution by America’s preeminent landscape architect. His legacy continues to reward those of us fortunate enough to witness his achievements.

In the world of landscape architects, Frederick Law Olmsted is best known for his first major project, New York City’s Central Park. But one must know Olmsted’s interests and accomplishments before Central Park to grasp a full understanding of the man.

Born the son of a prosperous Connecticut merchant in 1822, Olmsted received a smattering of schooling, less than one term at the university level, but more than most men of his day. Pampered by an indulging father, Olmsted spent most of his formative years meandering from one interest to another.

At 21, Olmsted attempted to find some direction in life by going to sea. His service on a ship bound for China taught him that he was not cut out for a seafaring life. Service was hard. Officers took the best food and treated crewmen little better than slaves. Then, of course, came the seasickness. Olmsted returned home in 1844, not hale and hearty as he might have hoped when he left New York Harbor, but an ill skeleton of his former self. The experience led him in later years to advocate for a professional merchant marine, where officers and crew were bound by rules and regulations rather than by cruel captains meting out harsh punishment to the dregs of society.

No surprise, Olmsted’s interest shifted from the sea to land. He apprenticed with family friends who owned a Connecticut farm. He pursued an active social life and attended numerous lectures as an informal means of continuing his education. He tried Yale, but left before the end of the term. He returned to farming, and wanted to work on a model farm where he could enhance his scientific approach to farming. In a New York editorial office, he met and impressed Andrew Jackson Downing, the preeminent authority on gardening and domestic architecture. With Downing’s reference in hand, Olmsted landed an apprenticeship at George Geddes’s New York farm, Fairmont.

Olmsted stayed at Fairmont only six months, but with lessons learned from his service, he persuaded his father to purchase a 70-acre farm, Sachem’s Head, on Staten Island. The island was home to a number of prominent families, including the Vanderbilts. While he brought the farm up to snuff, Olmsted had difficulty remaining still. In 1850, he traveled to England with his brother John and their friend, Charles Loring Brace. While there, he saw the first public parks he had ever seen, parks open to everyone. No such parks had been set aside in America’s cities. He was smitten by the idea that large open spaces should be open to everyone, not just the wealthy.

After his travel, Olmsted directed his attention to writing, primarily about farming. His writing included a compilation of his travel journal, molded into Walks and Talks of an American Farmer in England in 1852.

Although he considered slavery evil, Olmsted had little tolerance for abolitionists. He wanted to take a different tact, one analyzing slavery purely from an economic viewpoint. In December 1852, he set out to interview slaves and slave owners for a series of New York Daily-Times (now the Times) articles. He came to the conclusion that the slave economy benefited neither master nor slave. Slaves were kept in a perpetual state of ignorance and had no incentive to improve their performance.

Free Northern laborers were two to four times as productive as slaves in comparable tasks. In the few cases where slaves received some form of reward for productivity, the slaves worked harder. Thus, apart from the immorality of the practice, the “peculiar institution” was economically inferior to free labor. Olmsted’s observations converted him to the cause of abolition.

Not all went well for Olmsted. He joined a publishing venture, Putnam Magazine, with literary colleagues. While the magazine received widespread literary acclaim, it failed as a financial venture. After that failure he was not sure where his life was headed.

In August 1857, Olmsted traveled to Morris Cove, Connecticut, to work on a book. While at tea one day, he sat next to a member of New York’s new Central Park commission. Life would never be the same.

The Panama Canal – And Then Came the Americans 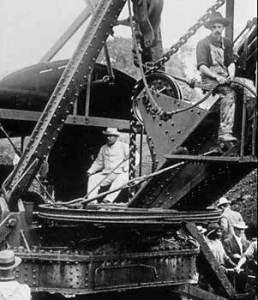 Roosevelt visits the Panama Canal under construction, in 1906 (Source: BBC)

Teddy Roosevelt wanted to build a canal through the Isthmus of Panama, and no one was going to stop him. First, we need to remember that before the Americans began the massive engineering project, what we now know as Panama was part of Colombia. When the Colombian government did not agree to the terms desired by the Roosevelt administration, the United States supported a junta-led rebellion that otherwise would have been crushed by the Colombian military.

The United States sent gunboats to both shores and a battleship to Colón, Panama to insure success of the rebellion. The collaboration included a French engineer (and investor in the earlier French project, who stood to gain significantly when the United States compensated the French company for its rights) who immediately after the rebellion negotiated an agreement with Secretary of State John Hay on behalf of the junta. The terms included United States sovereignty over a ten-mile-wide swath of land from the Atlantic to the Pacific. This was not one of those bright, shining moments in United States history.

Once the United States took control of what would become the Panama Canal Zone, the Isthmus Canal Commission, the governing body of the zone, had to conquer the enemy that had ground the French to a halt – the yellow fever- and malaria-carrying mosquitoes.

Timing is everything. In 1880, French Army Surgeon Charles Laveran first discovered parasites in the blood of a patient suffering from malaria. In 1886, 1890, and 1897, Italian scientists made further discoveries about the specific malaria parasites. Also in 1897, British medical officer Ronald Ross demonstrated that malaria parasites could be transmitted from patients to mosquitoes and from bird to bird, and that the parasites could be developed in and spread by mosquitoes.

During the American occupation of Havana after the Spanish-American War, army surgeons developed programs that reduced mosquito breeding, thereby eradicating yellow fever and greatly reducing malaria. In 1904, Colonel W.C. Gorgas applied the lessons of Cuba in a seven-prong program to attack mosquito breeding in tropical Panama: draining pools near villages and homes; cutting brush and grass near villages and homes; using oil to kill mosquito larvae where drainage was not possible; spreading larvacide where oiling was ineffective; dispensing quinine to workers as a prophylactic measure; screening government buildings and living quarters (screening for living quarters was limited largely to quarters for white workers); killing adult mosquitoes found in houses during the daytime.

Just as in Cuba, the program largely eradicated yellow fever and dramatically reduced deaths from malaria. Hospitalizations for malaria decreased from 9.6% of employees in 1905 to 1.6% in 1909.

As I said earlier, timing is everything. Without the discoveries made in the decades preceding the United States’ success in Panama, the Americans may well have met the same fate as their French predecessors.