The Union Pacific Railroad’s Thomas Durant: Getting the Facts Right 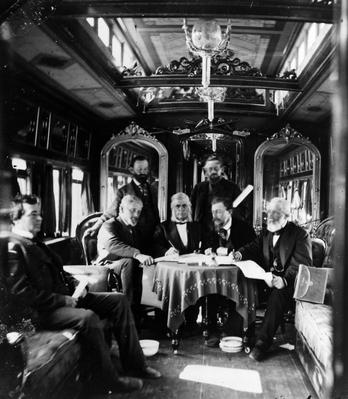 A meeting of the board of Union Pacific Railroads in a private railway car. L-R, seated at the table Silas Seymour, consulting engineer, Sidney Dillon, Thomas Durant (1820 – 1885), and John Duff, directors. Photograph by Andrew Joseph Russell (1830-1902). (Photo by A. J. Russell /Getty Images)

The popular television show Hell on Wheels has part of it right – Thomas Durant was a stock manipulator and con man who did not hesitate to instruct his engineers to take the long way to get from Point A to Point B so as to maximize the railroad’s take at the government trough. But much of the rest of the portrayal is at odds with fact – he spent very little time on the railroad, preferring to make business deals in his luxurious New York office or entertaining clients on his yacht. Just understand that the television program is for your entertainment. (Similarly, the show puts the Central Pacific’s Collis Huntington in California. As the eastern agent for the Central, he moved to New York in 1863. He lived and worked there, with side trips to Washington, D.C. He did not return to the West until December 1868, when he wanted to see for himself the railroad’s progress. He immediately returned to New York after an absence of only 31 days.) Consult the history for the facts. 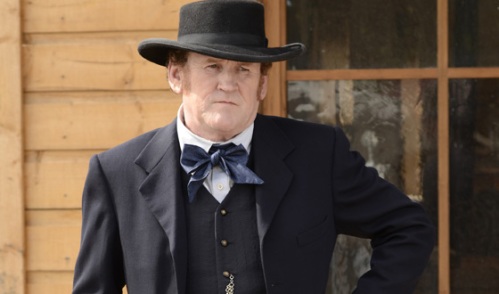 He was born in 1820, the son of a prosperous Massachusetts merchant – also at odds with the television show’s portrayal of him as someone who had to grovel for sustenance as a child. At 20 years old, he graduated from Albany Medical College with a specialty in ophthalmology. At 23, he cast that profession aside to join his uncle’s shipping firm as a partner.

In 1853, Durant became a partner in the contracting firm of Farnam and Durant. The firm’s first project was the Chicago and Rock Island Railroad (which later hired attorney Abraham Lincoln to represent the company in a dispute with ferryboat companies about a bridge built over the Mississippi River). Due to contract obligations having to be paid in the form of railroad securities, Farnam and Durant ultimately took control of the railroad, with Farnam as its president.

Thereafter, Farnam and Durant chartered another railroad company, the Mississippi and Missouri Railroad (“the M&M”), with their eyes set on Council Bluffs, Iowa, and Omaha, Nebraska, the first set on the east bank of the Missouri and Omaha across the river on its western bank. The railroad progressed in fits and starts, with bond money from Council Bluffs, Omaha, and several Iowa counties that wanted in the game. The company had made little progress when the Panic of 1857 brought down the whole operation. With most of the bond money unaccounted for, Farnam discovered that Durant had pledged their construction company’s securities to dabble in the stock market. Durant survived the Panic unscathed while Farnam was ruined and Iowa saw very little track and grade for its investment in the railroad men.

Undeterred, Durant set his eyes on the transcontinental enterprise. Once he took control of the Union Pacific during the Civil War, he could look west and hope to complete the tracks that would connect the west coast to the east. Contrary to President Lincoln’s wishes, Durant established the eastern terminus in Omaha rather than Council Bluffs. That bridge would have to wait until after Promontory Point, when Durant had left the company. A railroad bridge over a major river is an expensive project, especially when your company can lay miles of tracks in less time over the Great Plains.

It had to test Durant’s patience and stamina, for the Union Pacific did not lay a single rail until after Appomattox. Along the way, Durant established Credit Mobilier, the construction company that secured all the contracts for the grading, the tracks, and all the bridges, trestles, and tunnels – thus guaranteeing Durant would make money in the enterprise even if the Union Pacific failed. Ultimately the Union Pacific had laid two-thirds of the track between Omaha and Sacramento when the golden spike was driven at Promontory Point on May 10, 1869. Durant cheated business partners and employees the entire journey, but in the end he received credit for an achievement that resulted as much despite his interference as because of his contributions.