The 1960 Presidential Election & the Lingering Effects of the Civil War 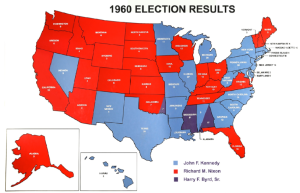 In my previous article, I explained how the Democrats’ implosion at the 1860 Democratic National Convention in Charleston, SC, opened the door to Lincoln’s election. This week, we will move ahead 100 years to see how the Civil War affected party politics well into the twentieth century. Some say it still continues to affect national elections. I would not contest the point.

It may be difficult to believe today, but in 1960, John Kennedy, a Massachusetts Democrat, could not have won the White House without winning most of the South. Nixon took Virginia, Tennessee, and Florida, but Kennedy took North Carolina, South Carolina, Georgia, Arkansas, Louisiana, and Texas. A third party candidate, Harry Byrd, took Mississippi. Kennedy and Byrd split the electoral votes in Alabama.

One only has to look at Eisenhower’s landslide victories in 1952 and 1956. Although Ike was very popular as the World War II commander of the Allies’ European forces, Democratic candidate Adlai Stevenson won his few electoral victories in the South, winning North Carolina, South Carolina, Georgia, Alabama, Mississippi, and Arkansas in both elections (also winning West Virginia, Kentucky, and Louisiana in 1952, but not in 1956, and picking up Missouri in 1956).

So, what turned the tide? When Johnson signed the Civil Rights Act of 1964 into law, outlawing discrimination in voting registration, schools, and employment, he knew he did so at the peril of the Democratic Party. Although Johnson won a landslide victory in 1964, Republican candidate Barry Goldwater took South Carolina, Georgia, Alabama, Mississippi, Louisiana, and his home state of Arizona. It seems white Southerners were more intimidated by the immediate prospect of African Americans with equal rights than by the more remote possibility of a nuclear war that might extinguish human life from the planet. (See Johnson campaign “Daisy Girl” commercial below)

Once the Republicans made inroads into the South, they employed a “Southern strategy,” successfully convincing many Southern Democrats that the Democratic Party had become hostile to Dixiecrats’ segregationist policies. The trickle of Southerners into the Republican Party became a flood. But in 1960, most white Southern voters viewed Republicans as the party of Lincoln, the party of “Northern aggression.” They had not yet abandoned the party of their ancestors.

To see electoral maps from Presidential elections, go to the President Elect website at http://presidentelect.us.