Through his writing, his farming experience, and his social and publishing contacts, Olmsted had established the credentials that won him the Central Park directorship in September 1857. Half the battle was won. He still had to fight for the new park’s design. 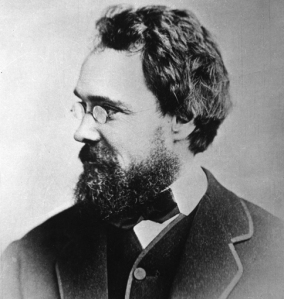 To his benefit, the architect Calvert Vaux solicited Olmsted to partner with him in the design competition. The London-born Vaux had won substantial recognition when he came to work as Andrew Jackson Downing’s assistant seven years earlier. After his initial hesitation, Olmsted joined forces with Vaux. The two men were awarded the design along with a $2,000 prize ($60,000 in today’s money) in April, 1858. Their plan had to accommodate the traffic of a large city while affording a 700-acre country-like setting to the park’s visitors. The designers did this largely by building four transverse roads that ran beneath pedestrian traffic.

Olmsted biographer Laura Roper highlighted the fact that the label “landscape architect” was new to the American lexicon:

With Central Park, Vaux and Olmsted stood at the beginning of the life work that was to raise them and their calling to recognized professional standing. Olmsted understood well that this first essay in the creation of beautiful and extensive landscape for public enjoyment was an important departure for the art in the United States, making its benefits available not to a privileged few but to citizens generally.   – Roper, FLO, A Biography of Frederick Law Olmsted, p. 144 (emphasis added).

While Vaux’s name is seldom mentioned when commentators speak of Central Park, Vaux’s contribution was every bit equal to that of Olmsted.

Over the next nine years, Olmsted worked off and on with Vaux on the Central Park project. The “off” came with the Civil War, when Olmsted directed his energies to the private Sanitary Commission, a medical philanthropy that provided severely needed support to the Union army during the Civil War. Olmsted served as Executive Secretary of the commission. Both in New York and on the battlefield, Olmsted found his greatest obstacles were political – Central Park’s controller in New York and a host of politicians, especially the army’s surgeon general, in Washington. In both instances, Olmsted learned to work around the obstacles. During the Civil War, he won praise from both Lincoln and Grant for his work on behalf of the troops.

Despite his contribution to the care of the Union soldiers, Olmsted grew tired of the politics, and was persuaded by Charles Dana in August, 1863, to take leadership of the Mariposa Company, the struggling gold mining company that occupied 70 square miles in the foothills of the Sierra Nevada. The land had originally been claimed in 1847 by John Fremont, the adventurer who ran as the Republican Party’s first candidate for President in 1856. Whether due to too little gold or poor business acumen, Fremont managed only to run up debts. Despite Olmsted’s best efforts, the mining company remained unprofitable, and Olmsted left his post in the fall of 1865.

Photo I took at Olmsted Point in Yosemite National Park

Olmsted did not leave California empty-handed. While there, he fell in love with Yosemite Valley and the Mariposa Grove of Sequoias. He wrote in support of protecting the land from private development. His work earned him appointment to the first Yosemite Commission. For the rest of his life, he continued to support the landmark’s preservation for public enjoyment. (Yosemite was designated as a National Park in 1890.)

In the summer of 1865, Olmsted and Vaux were reappointed as landscape architects to Central Park. With an annual salary of $5,000 (at a time when the average annual wage was around $350), Olmsted could return to the profession for which he was most suited. With the rebellion and Mariposa behind him, he was ready to build his legacy as America’s premier landscape architect. That legacy included parks in Boston, Buffalo, Brooklyn, Chicago, and Milwaukee, among others.

He did miss the mark once when he said San Francisco’s climate and topography precluded construction of any park similar to New York’s. Mining engineer William Hammon Hall proved him wrong with Golden Gate Park. But unlike many inflated egos, Olmsted later confessed error and had only praise for the accomplishment. Olmsted’s work included a proposal ultimately put into effect at the United States Capitol – broad marble terraces on each side of the Capitol Building, providing a formal transition from the building to the mall extending to the Washington Monument and the Lincoln Memorial.

Whether one visits New York City or San Francisco, the nation’s capital or Yosemite – to mention only a few – the visitor likely sees some significant contribution by America’s preeminent landscape architect. His legacy continues to reward those of us fortunate enough to witness his achievements.

The Red Cross and the 1906 San Francisco Earthquake

August 8, 2014 marks the 150th anniversary of the founding of the International Red Cross. While Clara Barton worked tirelessly on behalf of the Union injured on Civil War battlefields, it was a Swiss citizen whose observations of an Italian battlefield motivated him to lead the efforts to establish the Red Cross.

In 1859, Dr. Henry Dunant witnessed the aftermath of the Battle of Solferino, where more than 45,000 soldiers lay dead or wounded on the battlefield. In 1862, he published Memory of Solferino, in which he proposed to set up volunteer groups in every country to take care of casualties in wartime and to persuade governments to agree to protect first aid volunteers and wounded on the battlefield. Thus, the Red Cross was initially founded to ameliorate conditions in times of war.

In 1864, the First Geneva Convention adopted an emblem that reversed the colors of the Swiss flag. During its war with Russia 22 years later, the Ottoman Empire substituted the crescent for the cross, which was offensive to Muslim religious beliefs.

Clara Barton led the effort to establish the American Red Cross in 1881. The charity was largely identified with her during her lifetime. The American Red Cross immediately went to work leading efforts to aid victims of natural catastrophes, beginning with a Michigan forest fire in 1881; helping Ohio River and Mississippi River flood victims in 1884; leading 50 volunteers to help the victims of the Johnstown flood in 1889. The American Red Cross elected her “president for life” in 1901. She resigned three years later at the age of 82 in response to criticism about her management style, abilities, and age.

The American Red Cross received its first congressional charter in 1900, and its second in 1905, one year after Barton’s resignation.

On Thursday, April 19, 1906, disaster met opportunity. One day after the great earthquake, while fires raged across San Francisco, President Theodore Roosevelt sent a telegram to Dr. Edward Devine, the General Secretary of the Charity Organization of New York. Roosevelt requested that Devine represent the Red Cross in the San Francisco relief operation. After Devine accepted the appointment, Roosevelt issued a proclamation declaring that “the out-pouring of the nation’s aid should as far as possible be entrusted to the American National Red Cross, the national organization best fitted to undertake such relief work.”

By that proclamation, Roosevelt established a practice that would be followed by his successors, recognizing the American Red Cross as the leader of emergency relief in times of disaster. If the Red Cross lost one identity with the departure of Clara Barton, it forged its own two years later and regained its moral force with the Chief Executive’s imprimatur.

The Little Bank that Could and the 1906 San Francisco Earthquake 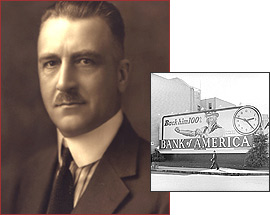 It’s like something out of It’s a Wonderful Life. A small bank provides a place for small depositors and borrowers to do business in a city dominated by big banks that serve only the wealthy. Then, after an earthquake and a fire destroy a quarter of the city, the small bank immediately rises from the ashes to provide its customers loans to rebuild and a place to safely deposit their money while the big banks close their doors for six months.

But unlike the popular movie, this story is true. In 1901, Amadeo P. Giannini had retired at the age of 31 after selling his share of a produce business for $100,000 ($2.7 million in 2014 dollars). He came out of retirement three years later to establish the Bank of Italy as “the little people’s bank,” eighteen months before the April 18, 1906 earthquake.

To his surprise on the morning of the earthquake, his employees had removed the bank’s $80,000 dollars in gold and silver from the Crocker National Bank vaults, and were ready to operate business. By early afternoon, he realized he had to remove the bank’s assets out of the city. He and an employee acquired two wagons to haul the bank’s fixtures and, more importantly, the money.

They hid the bags of money under crates of oranges. They traveled only four miles, during daylight, to the home of Giannini’s brother. After nightfall, they resumed the journey to Giannini’s home in San Mateo, fourteen miles south of San Francisco, where they hid the money in the ash pit of the living room fireplace.

The old Bank of Italy in San Francisco (Source: ItaloAmericano.com)

As important as it was to get the bank’s assets out of the city, it is what Giannini did the next two days that set his bank apart from the big banks. He encouraged his customers to borrow money to rebuild and to deposit their money in his bank, where it would be safer than in the refugee camps that sprang up to house San Francisco’s homeless 225,000 citizens. He set up the bank’s “main branch” at his brother’s house and a second branch on the waterfront once the fires were contained. While the big bankers wrung their hands, Giannini put his bank to work, affording average San Franciscans the means to begin rebuilding the city.

Giannini made loans based on his knowledge of the borrowers’ character, not their credit reports. Years later, after he expanded and merged his way to build the Bank of America, he said every one of those 1906 loans had been repaid. The early version of the “Bailey Savings and Loan,” i.e., the Bank of Italy, did not remain small for long. At his death in 1949, the Bank of America was the largest bank in the United States.