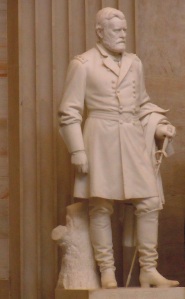 Statue of Ulysses S. Grant inside the Capitol

I find it amusing that some writers direct so much attention to General (and later President) Ulysses S. Grant’s purported drinking problem. At times, I’ve fallen into the same trap, wondering whether some of the speculation is true.

Grant did provide his detractors some material for the charge when as a captain in the army, he was pressured into resigning from the army at Fort Humboldt in 1854 rather than facing a court martial for drunkenness while on duty – a charge that could have been leveled against most of his fellow officers. By that time, Grant had been away from his family so long and missed them so desperately, it took the slightest nudge to put the army behind him.

Any evidence of Grant’s drunkenness after that date is largely speculation. His detractors, both North and South, had plenty of incentive to invent such claims:  Union officers who wanted to advance their own careers by engaging in the age-old practice of disparaging a fellow officer; Southerners who wished to dismiss Grant’s victories on the battlefield as attributable solely to the Union army’s numerical advantage.

This much most historians agree on: Grant never had drinking issues when he was actively engaged in a military campaign or when his family stayed with him at his headquarters (as was the case during the siege of Petersburg). Grant was devoted to both his family and his country’s success in putting down the rebellion. 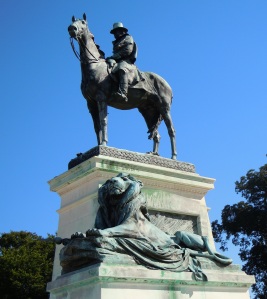 Another statue of Grant outside of the Capitol

Grant succeeded where his predecessors failed. Prior to Grant’s Virginia campaign against Lee, he had notched significant Union victories at Forts Donelson and Henry, Vicksburg, and Chattanooga. In Virginia, the Union army primarily fought an entrenched enemy, for which a 3:1 advantage was required for success – an advantage the Union army did not have until Petersburg.

If the Union army was to prevail against a determined well-led enemy, both armies had to suffer casualties at a gut-wrenching level. Both Grant and Lee were brilliant, but both suffered horrendous defeats due to hubris (Pickett’s Charge at Gettysburg for Lee) or failure to adequately scout the enemy (Cold Harbor during the Virginia Campaign for Grant), but neither man allowed a single failure to deter him from his larger task.

In brief, the evidence is mixed and should not be cited to some way diminish Grant’s accomplishments. Grant deserves his place in history as the general who “conquered the peace.” At the close of the Civil War, he commanded the largest military force in the world. He won two terms in the White House and probably would have won a third if he had actively sought the Republican Party nomination. He was the most popular man of his time. There’s ample reason the man and his armies are memorialized by statuary on the Washington Mall. 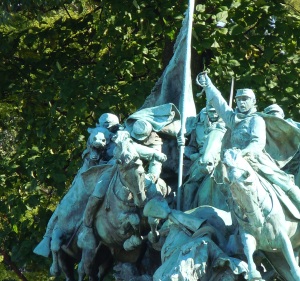 Statue of union troops during the Civil War; photo taken outside the U.S. Capitol

For both sides of the argument, go to the following sources:

H.W. Brands, The Man Who Saved the Union: Ulysses Grant in War and Peace, Doubleday (2012).