You know the drill if you’ve seen any crime show. The police detective “Mirandizes” the accused when he is taken into custody:

You have the right to remain silent.

Anything you say can and will be used against you in court.

You have the right to an attorney before making any statement and may have your attorney with you during questioning.

If you cannot afford an attorney and desire one, the court will appoint one for you.

You may stop the questioning at any time by refusing to answer further or by requesting to consult with your attorney.

When the United States Supreme Court issued its opinion in Miranda v. Arizona [384 U.S. 436] in 1966, many law and order conservatives screamed that the Supreme Court’s opinion imposed unreasonable restraints on state and local law enforcement officers.

Federal law enforcement officers were already providing Miranda-like warnings in custodial interrogations. The Federal Rules of Criminal Procedure required production of an arrested person before a commissioner “without unnecessary delay” and excluded evidence obtained in default of that statutory obligation. At the outset of an interview, the FBI’s established procedures required the investigating agent to advise any suspect or arrested person in a custodial setting that he was not required to make a statement, that any statement may be used against him in court, and that the individual may obtain the services of an attorney of his own choice. 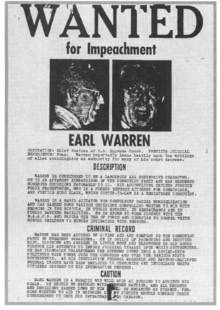 One of many posters at the time to impeach Chief Justice Earl Warren.

Warren expressed concern about an accused being questioned by police or prosecutors in a room in which he is cut off from the outside world. Police violence and the “third degree” flourished during the 1930’s and was found by the 1961 Civil Rights Commission to be the rule among some policemen. Warren cited one instance in which Kings County, New York police beat, kicked, and placed lighted cigarette butts on the back of a potential witness for the purpose of securing a statement incriminating a third party.

That federal law enforcement officers succeeded in prosecuting criminals effectively rebutted those who contended that state and local officers could not do their jobs effectively if they had to issue such warnings and had to allow suspects to remain silent and obtain assistance of counsel.

The Warren Court suffered great criticism for “coddling criminals,” but the Justices merely expressed the likely intent of the Founding Fathers, particularly James Madison, who insisted that the Constitution include a Bill of Rights to protect the citizen from overreach by the state. 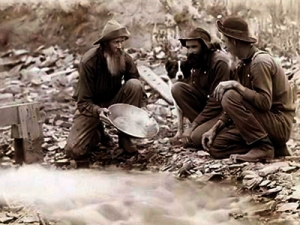 You know the old adage, “necessity is the mother of invention?” Necessity is also the mother of change in attitudes. When young men headed to the California gold fields, with few exceptions, they left the women behind. Most expected to get rich quick and return home with their plunder.

In the late 1840s, men in California outnumbered women by better than nineteen to one. Even at that, many of the women who made the hazardous journey to California sought their fortunes, not by mining California’s rivers for gold, but by selling their companionship to the highest bidder.

Back east, most states followed English common law and bestowed very few rights to women – forget the right to vote – most women enjoyed few property rights, their lot in life dictated by the whims of their husbands.

At the 1849 Monterey, California constitutional convention, California’s early leaders sought to improve their own marital chances by enacting liberal divorce and property laws. They adopted divorce laws that lowered the bar for an unhappy spouse to win court dissolution of an unhappy marriage.

The delegates also adopted the Spanish community property law model rather than the English common law model. This protected women’s property rights in two respects: (1) a woman controlled the property she acquired before marriage or by gift or inheritance during marriage; and (2) a husband and wife were treated as partners, each of whom would share equally in wealth accumulated during their marriage. Thus, a husband could not use his wife’s separate property as his own in some risky venture nor could a creditor go after the wife’s separate property to collect her husband’s debt. If a marriage ended in divorce, half of the property accumulated during the marriage was hers. [Caroline B. Newcombe, The Origin and Civil Law Foundation of the Community Property System, Why California Adopted It and Why Community Property Principles Benefit Women, 11 U. Md. L.J.  Race, Religion, Gender, and Class, Volume 11, Issue 1 (2011); http://digitalcommons.law.umaryland.edu/rrgc/vol11/Iss1/2%5D

The delegates clearly wished to motivate women to join them in California. The risk of losing a bride to divorce or losing property acquired during marriage paled in comparison to the enhanced opportunity of bringing members of the opposite sex to California’s shores. As one bachelor delegate said, “It is the very best provision to get us wives….” [Jo Ann Levy, They Saw the Elephant, p. 190 (Archon Books 1990)]

Henry Halleck, future Union general and thorn in General Grant’s side after the Battle of Shiloh, echoed the sentiment:

I am not wedded either to the common law or the civil law, nor, as yet to a woman; but having some hopes that some time or other I may be wedded, and wishing to avoid the fate of [an unmarried friend], I shall advocate this section in the constitution, and I would call upon all the bachelors in the convention to vote for it. 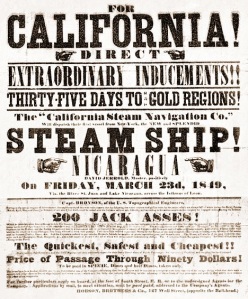