For some of us, the City of Savannah elicits thoughts of ghosts in America’s Most Haunted City. Many southern college students see the city as a St. Patrick’s Day celebration when the city is awash with green beer and visitors in the tens of thousands.

But this month also marks the 150th anniversary of General William T. Sherman’s capture of Savannah. On November 15, 1864, after Confederate General John Bell Hood left Georgia for his army’s ultimate destruction in Nashville, Tennessee, Sherman left Atlanta for his famous march to the sea to make Georgia howl. He cut his supply lines behind him and his men grew fat on the livestock and produce that lay in their path from Atlanta to Savannah.

I beg to present you, as a Christmas gift, the city of Savannah, with 150 heavy guns and plenty of ammunition, and also about 25,000 bales of cotton.

Lincoln received the dispatch on Christmas Eve. Sherman, who had wrecked Atlanta and pillaged and burned his way through Georgia, had applied a gentle touch to Savannah.

In one rare moment, after burning his way through Georgia and before doing the same to South Carolina, Sherman spared the town’s historic architecture from the hard hand of war. 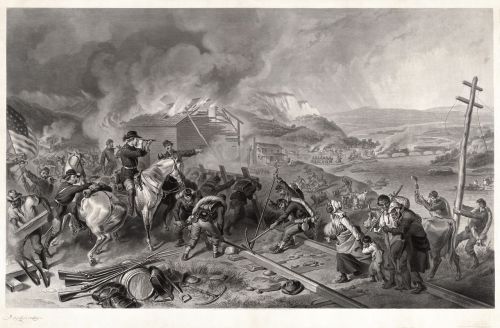 If you have the pleasure of visiting this historic Southern city with its many beautiful town squares, whether to search for ghosts or to lift a glass of green beer, pause to give thanks to “Uncle Billy” (the troops’ nickname for General Sherman) for sparing much of the beauty that surrounds you.