Putting the History in the Historical Novel: Slavery and Women’s Rights in Antebellum America

If you read my blog, you probably are already a rabid history fan. Even if you’re not, you should consider the historical novel, so long as it accurately portrays the history of the period. This is the first of a 12-part series of articles in which I will share my methodology for crafting a story, which I hope is both interesting and informative. Let’s begin with New Garden, a Civil War era novel.

The book is largely about two Quaker brothers who make decisions that put themselves at odds with their faith. Jack Grier joins the U.S. Army at the eve of the Mexican War. His brother Richard becomes a lawyer and politician and marries into a slaveholding family. How do those decisions affect them and everyone around them? No matter how much success Richard achieves, he can never get past his father’s obvious favoritism for Jack, even when Jack is on the other side of the country in California.

Slavery is the overwhelming issue of the day. I did not try to convey the meaning of the institution by merely citing statistics and quoting famous politicians of the day. That’s for a history class. I weave the topic along with that of women’s non-existent legal rights in the context of a story. How did slavery and women’s position play out in Southern society? 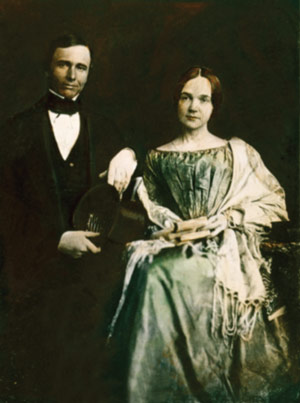 White masters and overseers often took advantage of their power over the women held in bondage. Their children’s legal status was determined by the status of the mother, not by the status of the father. If the mother was free, the child was free. If the mother was a slave, the child was a slave. How did this play out in the Southern household where the children included those who were free – the offspring of the master and his wife – and those were slaves – the offspring of the master and a household servant?

The Civil War diarist Mary Chesnut (whose husband served as a United States Senator from South Carolina before the Civil War) was highly critical of miscegenation and offered this commentary:

Every lady tells you who is the father of all the Mulatto children in everybody’s household, but those in her own, she seems to think drop from the clouds.

In New Garden Richard Grier’s future father-in-law, Edward McAllister, transfers ownership of Alicia, his daughter by his household servant Annie, to Richard as a wedding gift. Richard is engaged to Alicia’s half-sister, Lydia. McAllister sent both daughters to Canada for an education, but Alicia’s legal status has reverted to that of a slave upon her return to North Carolina. The following is an excerpt (183-184) in which Annie and Alicia discuss her plight.

“You say you think he’s giving me to Richard? No, Mama, he wouldn’t do that. He might give me to Lydia, but not to her husband. Why would he do that?”

“Now, Alicia, we’ve talked about that. Giving you to Miss Lydia would make no difference at all. You’d belong to Mr. Grier anyway. Even I know that about the law. You seen the other slave owners. Most of ‘em have at least one colored girl to keep ‘em warm when the wife’s not willing or able. I figure you going to be that girl for Mr. Grier.”

Alicia shuddered, then said in a soft, weepy voice. “Mama, I don’t think Lydia would allow it.”

“Miss Lydia about to get a big-time lesson on how things are. White women got no rights once they say the ‘I do’s.’ After that they do whatever the husband tells them, just like us. Better not back talk neither. You seen Old Man Hoskins and all the colored folks in his house. Most of them’s his children. Old Miz Hoskins has to grin and bear it. Better act like she don’t know what’s going on.”

In just a few paragraphs or pages, the reader learns how the peculiar institution actually played out in the southern household of slave owners. The passage should tug at the heartstrings of anyone.

New Garden is available on line from Amazon, Apple, and Barnes & Noble. Each website includes a “look-in” feature with the first few chapters of the novel. In Greensboro, NC, the novel is available at Scuppernong Books and the Greensboro Historical Museum Bookshop.