YOSEMITE SUMMER: Then Came the Belgians

Only two weeks remain before I leave the park. Back to Olmsted Point today. I never know whether I’ll freeze or fry. This morning, brisk breezes brought a chill to the air so I found myself wearing my parka the entire shift.

Hikers on the Half Dome cables came in greater numbers than normal. A large group must have camped in Little Yosemite Valley the previous night to get a three-hour head start on hikers starting from Happy Isles in [Big] Yosemite Valley. It was fortuitous because dark clouds threatened early. It’s not wise to cling on to steel cables for dear life if an electrical storm threatens.

I got the usual “oh” or laughter whenever a visitor using the telescope honed in on the hikers climbing the cables. 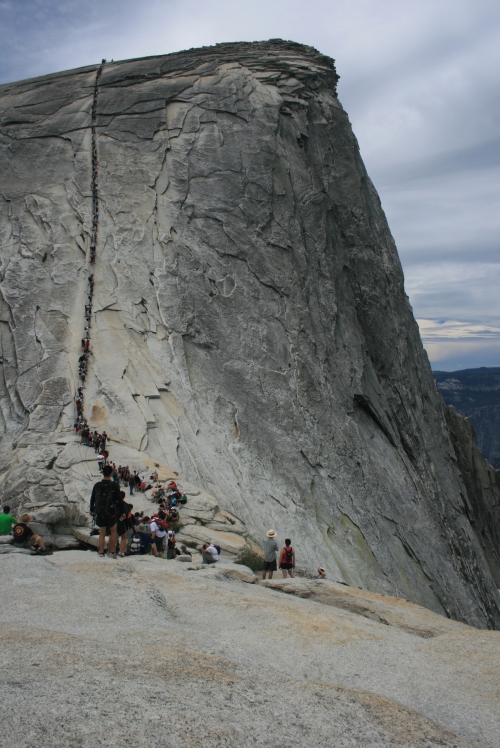 I’ve learned that foreign visitors not fluent in English are reluctant to approach the telescope.

I’ve spoken with many visitors from Belgium. [Are there any remaining at home to tend to the chocolate shops?] They largely speak our language very well and are very courteous. Today, I spoke with five Belgians who were very interested in the local sights, but also took great interest in me – we spoke for about 15 minutes and they seemed reluctant to leave. I finally moved on to other visitors, but the Belgians left me with good feelings about their country. We Americans would do well to emulate their conduct.

We had an afternoon shower around 3pm and an evening thunderstorm just after 9pm. I’m glad the evening storm held off until I returned to my tent from a Ranger campfire program about global warming and its direct effects on the Sierra Nevada. Once again, my REI Kingdom 4 has weathered the storms. 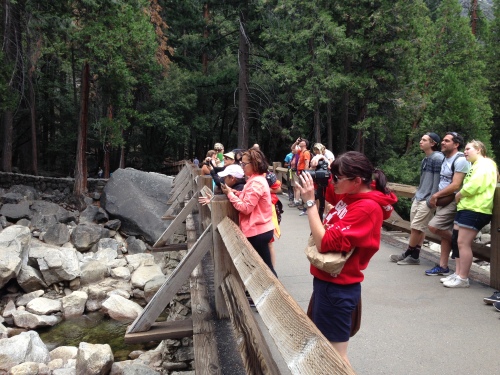