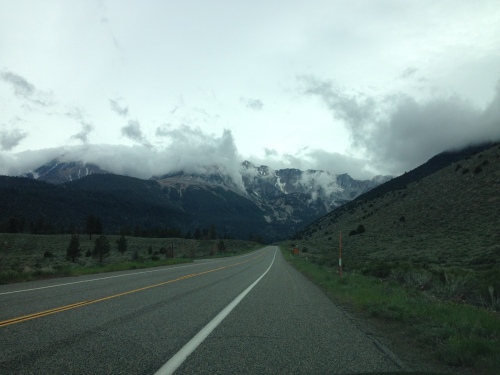 The view up Tioga Pass the day before I start my volunteer duties.

I left Murphey’s Motel in Lee Vining just after 10:30 am. I stopped at the Mobil for a block of ice for my cooler. My reporting instructions said I would be able to trade out water containers in a freezer, but I was not about to risk loss of food on that representation. I soon learned that the system works very well, and at five dollars for a block of ice, it proved well worth my time to schedule my showers around the same time I switched out bottles of water for bottles of ice.

I arrived at the Tuolumne Meadows campground just before noon. I proceeded to Loop D, most of which was reserved for Yosemite Conservancy (YC) volunteers. The campground road is full of potholes, many posing a threat to vehicle integrity. Due to recent heavy rains, the sojourn on the one-way road is a maze of solid ground interspersed with ponds and puddles. I saw a Volkswagen van at site D4 and decided to encamp on the neighboring waterfront property, site D3. I opened the bear box, a large rectangular steel box, intended to keep the local black bears from probing the campgrounds. I lined the box with a tarp and filled it with my recent food purchases from Costco and Walmart. With that task complete, I headed to the Visitors Center.

A month earlier, I had shipped my tent and other camp gear to the YC office in El Portal. I had also purchased a cot and topper from REI, which shipped the items directly to the El Portal office. The YC office in turn delivered all the gear to the Visitors Center (VC). Upon my arrival at the VC, the Rangers told me I needed to take the gear immediately, as the gear impeded their movements in their small office. I readily obliged.

Upon my return to my camp site, once again risking my rental car on the third world country road, I launched into setting up my 4-person tent. I had watched a YouTube video a month earlier and felt certain I had the IQ to handle the minor task. The tent parts are encased in a backpack, which unfortunately is devoid of meaningful instructions. But I remembered the body of the tent came out first and then all I had to do was attach the metal supporting structure, which consists of two separate sets of metal tubes which readily lock into each other.

I turned around and saw Woodlee, our team lead. (Volunteers will be identified only by their first names, except for Woodlee, who goes by his last name.) He asked if I needed help. Despite my gender, I am never one to decline assistance from someone who has experience in a task with which I have none. My role quickly evolved to that of veteran’s helper as Woodlee readily diagnosed the proper procedure. Within 30 minutes I had a solid looking REI Kingdom 4 tent in place. With a drizzle already underway, I would spend the night in a dry tent.

The rest I could manage. I had actually practiced assembling the cot at the Greensboro REI store. No problem there. But something was missing. I had my topper and my sleeping bag. But, wait, I had failed to buy a pillow (Well, you actually have to buy a pair.) at Costco. What the heck, I thought, I’ll just use a towel. That should do the trick. I’ll get a good night’s sleep. 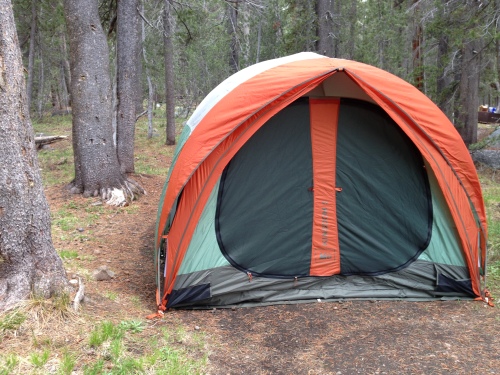 My tent in Yosemite

I awoke very cold. Mountain morning temperatures hovered around 40 degrees. I had used the sleeping bag like a blanket rather than squeezing my six-foot large-size frame in the small to mid-size mummy bag. And without a pillow, a crick in my neck added to my misery. To top it off, I had a great urge to march 90 yards to our loop’s restroom. For a male over 60, that’s a long 90 yards.

The restroom visit resolved one discomfort, but I rotated my neck as far as I dare while I added a second fleece jacket and my Columbia parka. Rubbing my hands to get warm, I put together my breakfast of cold oatmeal, cashews, and almonds, soon to be followed with my meal-time ration of two Pepperidge Farm cookies. Not a coffee drinker, my beverages of choice were Diet Coke and bottled water.

I was too focused on preparing myself for the day to notice the comings and goings of my fellow volunteers, but I later learned they had come equipped with the gear they needed for hot meals.

That afternoon, I met my colleagues at Adrienne’s campsite. Adrienne had driven a well-equipped RV. I found it hard to conceal my envy. The YC had put a canopy with netting over the site’s picnic table and there we made our introductions. Suzy and Taryn, the volunteer coordinators, handed out binders, shirts, ID tags, and ball caps with the YC logo. Suzy went over regulations and expectations. We all made our introductions: Adrienne, with a background in advertising; Cassie, a university student; Cyndi, a school teacher; Dee, a divorce mediator; Susan, a former teacher and currently a counselor to students with learning difficulties; and Woodlee, a professional photographer and artist. I soon learned these volunteers know the park better than I do, so I would need to study to get up to speed. Dee lightened the moment by sharing a birthday cake her daughter had given her.

That evening, I struggled through another night without a proper pillow. This could not continue. 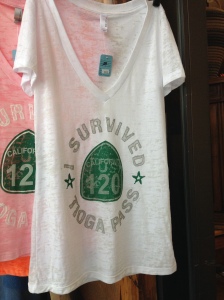 Late Saturday morning, we headed to Parsons Lodge for further training. We had a lot of material to take to the structure, so Woodlee suggested that I drive. Five of us got in my car while two others walked. We drove a mile to Lembert Dome, then headed down the back road to Parsons. Woodlee unlocked the road gate where regular traffic is prohibited. I carefully headed down the road, but at one point we got stuck on a large granite rock. We had to “portage” (i.e., everyone but the driver had to exit the car so the car could proceed). Anyway, we ultimately reached our destination.

There, we met Ranger Margaret, who had spent childhood summers at the site when her parents ran a campsite that was disbanded in the 1960s. She feels a special relationship to the meadow, which has a short growing season. She emphasized the need for hikers to remain on the trails rather than trampling on the meadow.

Woodlee reviewed the protocol for opening and closing Parsons each day. Duties include properly disposing of any mouse droppings before visitors are allowed to enter the 100-year-old structure. The “lodge” was built by the Sierra Club as a gathering place for its members. The club later deeded Parsons and surrounding acreage to the National Park Service.

Later that afternoon, I revealed my pillow dilemma to several volunteers. Several wanted to go to Lee Vining due to its superior cell phone and internet access, so we headed down thrilling Tioga Pass Road. To my delight, we found a camping pillow at an outdoor gear store. The night promised to be much more restful. And none too soon. I would start my volunteer duties at the Visitors Center the next day.