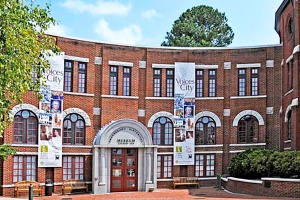 I count among my many privileges the opportunity to serve as a docent at the Greensboro Historical Museum, located in Greensboro, North Carolina. It is a beautiful museum filled with wonderful artifacts and operated by a lean but talented and dedicated staff. My service includes occasionally serving at several stations for tours.

One of my stations is “Debating Liberty,” which contains several exhibits related to the causes of the Civil War. Several of the exhibits within the station tell the story of young Levi Coffin’s advocacy on behalf of a runaway slave, Ede.

Levi Coffin, the reputed president of the Underground Railroad, was born in the Quaker community of New Garden, near modern-day Guilford College, and he lived there until he moved to Indiana in 1826 when he was 28 years old. His family was fervently anti-slavery and their views were well-known in the local community. While Quakers opposed slavery as part of their religious principles, one must understand that very few participated in the Underground Railroad, an illegal activity.

When his family lived in New Garden, Levi assisted runaway slaves in various ways. On one occasion a young slave, Ede, showed up at the home of Levi’s parents. She had taken her infant child to a wooded area to hide from her master, Dr. David Caldwell, when she learned that he planned to give her and her infant child to Dr. Caldwell’s son, who lived more than 100 miles from Greensboro. Ede was married to another slave (owned by a different master) and had three other children who would remain behind with Dr. Caldwell.

Ede and her infant child had spent several nights in the woods when the child became ill. She sought shelter and protection at the Coffin home due to the Coffins’ reputation. Levi’s parents took Ede and her child into their home, although it was a crime to harbor runaways. Levi then went to visit the Caldwells in an effort to dissuade Dr. Caldwell from bringing charges against his father and to prevail upon Dr. Caldwell to keep Ede in his household as a servant. 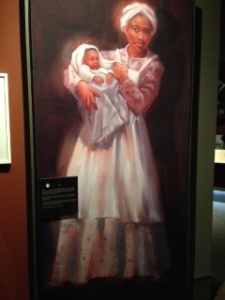 Ede and her infant (Photo by: Jim Gray)

Dr. Caldwell was a prominent Guilford County citizen. He served as a physician, Presbyterian minister, and school master of a boys’ school (less than a mile from my current home). The young people of the community liked Dr. Caldwell for his wit and good humor. Dr. Caldwell graciously received Levi into his home and, after talking about a host of other matters, Mrs. Caldwell entered the room. Levi informed the Caldwells that Ede and her child were being cared for by his parents. Mrs. Caldwell expressed her thanks that Levi’s mother had cared for the child and said that she had only reluctantly given her consent to Ede being separated from her family.

Levi asked whether his father had done right in taking in Ede and her child in violation of the law, thus making himself liable for a heavy criminal penalty if Dr. Caldwell was disposed to prosecute.

Dr. Caldwell told Levi that he had preached a very good sermon and he feared Levi might give up the prospect of becoming a preacher if he was not successful in his first effort. He said Levi’s father had done right and need not fear prosecution. Ede could come home and Dr. Caldwell would not send her away.

Thus, Levi Coffin could cite an early success in his struggle against slavery, a campaign he said he waged until 1863, when President Abraham Lincoln signed the Emancipation Proclamation. I will discuss the significance and legal limitations of that famous document in my next article.

Until then, if you live near Greensboro or are coming through in your travels, make a stop to tour the best historical museum between Washington, DC, and Atlanta.