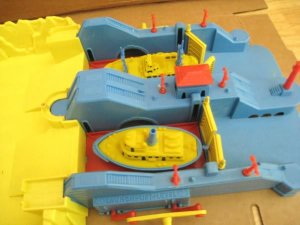 When I was five years old, I inherited a plastic Panama Canal play-set. I could not have been happier.

But the toy contained a crack – in the wall of the literally man-made lake – through which little toy ships had to be floated between the two sets of elevators. The crack required me to constantly refill the lake. On one summer weekday morning, I filled a glass jar for probably the twelfth time, and, as I carefully poured the water into the plastic lake, I dropped the jar on the concrete sidewalk. Shards of glass went everywhere, of course, but most significantly, one shard lodged in my neck.

Another photo of the Panama Canal toy (Source: Ebay.com)

At the tender age of five, I had survived a near-death experience. None of my five-year-old pals could claim such notoriety. Even better, I retained a tiny scar even after the stitches were removed. That meant that in the never-ending show-and-tell game of battle scars played by young boys, my battle story outshone all the rest.

So, what’s the point? The Panama Canal opened for operation on August 15, 1914. That 100-year anniversary reminded me of my childhood encounter with a smaller version of the real thing. The Panama Canal is often cited as one of the engineering wonders of the twentieth century.

Much like the 1950’s toy, the real canal is divided into essentially three parts. A series of locks on each end of the canal allows the ship to rise to the level of fresh-water lakes before descending to sea level on the other end. The canal extends approximately 50 miles between the Atlantic and the Pacific. Just like the toy, the locks are built in pairs to accommodate two-way traffic.

Many of the newer freight carriers are too large to pass through the current canal. The larger cargo ships sailing from Asia, which otherwise would transport cargo to the United States East Coast, currently have to drop their cargo at Long Beach, California, where freight trains carry the cargo to its ultimate destination. The Panama Canal is nearing completion of an expansion project that will double the canal’s capacity and thereby allow those cargo ships to bypass West Coast ports. The Canal will have to further expand its capacity, however, because shipbuilding companies continue to build even larger ships.

Happy (belated) 100th birthday to the man-made wonder that has captivated my attention from 5 years old until now at the ripe old age of…well we’ll leave it at ripe old age!