Snow Sheds of the Sierra Nevada

Mock up of snow shed construction on the transcontinental railroad. Photo taken at the California State Railroad Museum.

I had read about them, of course, while researching the construction of the transcontinental railroad for my upcoming sequel to New Garden. I know the Sierra Nevada – well, at least the portion that makes up Yosemite National Park, which I have visited at least once each year for the past fifteen years. I already understood that the Sierra, whose peaks reach 7,000 to 13,000 feet above sea level and trap the Arctic storms from the Pacific, experience heavy snows, sometimes from October to June.

I knew that the builders of the western leg of the transcontinental railroad, which ultimately would span 690 miles between Sacramento, California, and Promontory Point, Utah, faced a formidable task, having to drill the first of fifteen tunnels through granite just 92 miles east of Sacramento. 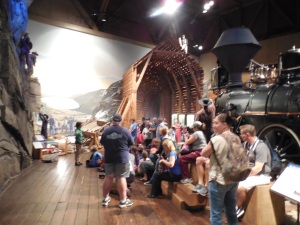 This past May, my wife and I traveled to Sacramento, where we visited the California Railroad Museum. While there, our excellent tour guide credited Building Superintendent Charley Crocker (who, along with Edwin Crocker, Collis Huntington, Leland Stanford, and Mark Hopkins, ran the Central Pacific) with the two most important executive decisions that made railroad construction possible in the Sierra Nevada: first, hiring thousands of Chinese to perform the labor that white laborers refused to do; second, building over thirty miles of “snow sheds,” which allowed the laborers to work and the trains to run in all but the very worst snow storms.

Samuel Montague, the Central’s chief engineer, identified the problem and proposed the solution in his December 1865 survey and construction report:

The heavy snowfall in the immediate vicinity of the Summit, amounting in the aggregate to ten, and sometimes even twelve feet in depth, and a much heavier accumulation at some points by drifting, will render it necessary to provide a substantial protection, either of timber or masonry, to ensure the successful and uninterrupted operation of the road during the winter months.

The principal points requiring such protection occur upon the eastern slope, and within two miles of the Summit . . .

The California State Railroad Museum includes among its exhibits a replica of a snow shed under construction. There’s nothing like seeing a full-size reproduction of the snow sheds. Imagine 37 miles of such structures plus 15 tunnels! (If you’ve ridden the Metro in Washington or the subway in New York, you have some idea of the claustrophobic sensation.)

Six years after engineer Montague’s report, the New York brokerage that marketed Central Pacific bonds could boast to its bondholders that Sierra Nevada winters posed no obstacle to coast-to-coast travel:

The experience of the past year has shown that [a] journey [from New York to San Francisco] can be made with almost as much accuracy and certainty, as to time and connections, as from New York to Boston, and that even in winter, in spite of the mountain snows, from which so much was dreaded, and so much of failure prophesied, the aggregate detention of passengers and mails, in proportion to the distance traveled, is less than that experienced between New York and New Haven.

Thus, thousands of Chinese workers and miles of snow sheds allowed the Central Pacific to conquer the Sierra Nevada granite and weather and to make coast-to-coast travel possible for those who could afford the fare. Travel from California to the east coast no longer required one to sail to Panama City, cross the isthmus, and then sail from there to New York. One could now forget the perils of ocean travel and cross the continent by rail in only two weeks.

I wish to thank the Railroad Museum’s curator, Kyle Wyatt, and librarian, Cara Randall. They generously provided their time and a wealth of information about the Central Pacific, including the materials cited below.

One response to “Snow Sheds of the Sierra Nevada”